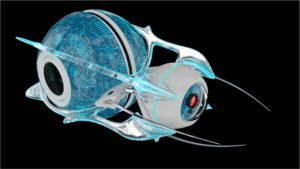 For some people, a routine dental checkup appointment can be a uncomfortable and unpleasant experience. This is because they have to undergo teeth cleaning procedure with mechanical or ultrasonic equipment. These are the tools used by dentist to remove the plaque and tartar deposits from your teeth. What if instead of your dentist cleaning your teeth. They could be cleaned by using small robots that remove plaque buildup from your teeth without any pain or discomfort?

Thanks to the research conducted at the University of Pennsylvania. Tiny robots can perform professional teeth cleaning for you on behalf of your dentists. The team which was comprised of engineers, dentists, and biologists from the University. They developed a small army of microscopic robots that can perform two main functions. The first group of the robotic cleaning system can adhere to the tooth surfaces and remove the biofilm. The second group is designed to play its role in the tight interdental spaces.

In terms of dentistry, this research, which was published in Science Robotics in April 2019, has huge implication, as it can help in reducing the workload of the dentists, and in minimizing discomfort for the patients which is involved during the mechanical debridement of the plaque and tartar deposits. Talking about this research, Edward Steagar, who is a team member in the research said, “Treating biofilms that occur on teeth requires a great deal of manual labor, both on the part of the consumer and the professional ”.

You might wonder, what is biofilm and why is it necessary to remove it from your teeth? A biofilm forms on all biological surfaces such as the joints and the teeth. If a biofilm forms on the teeth, it forms a sticky network which provides an excellent breeding environment for the bacteria which cause gum disease and teeth cavities in the mouth. In addition, it also protects the bacteria from the effect of antibacterial agents. Unfortunately, it is very difficult to remove a biofilm once it has formed. It requires a great deal of effort by the dentist, and patience by the patients to remove it.

The research team which has designed these micro-robots has named them as “catalytic antimicrobial robots” or CAR. The first group of these micro-robots is based on iron-oxide nanoparticles which have been suspended in a solution. Due to the excellent magnetic properties of these nanoparticles, their movement can be controlled with a magnetic field. Tthey can remove the plaque deposits efficiently in a plowing manner.
The second type of so-called CARS is made by embedding the nanoparticles in three-dimensional gel matrices having various shapes. These nanoparticles are specialized in removing biofilms in tight spaces, such as tubing, catheters or interdental spaces.

The results of this research show that both types of CARS can effectively kill bacteria while breaking down the biofilm matrix at the same time. Researchers found that when the CARS were used on teeth specimens, they could remove the biofilm, not only from the tooth surface but also from the hard to reach areas between two adjacent teeth.

Hyun (Micheal) Koo from the research team said that “Existing treatments for biofilms are ineffective because they are incapable of simultaneously degrading the protective matrix, killing the embedded bacteria, and physically removing the biodegraded products. These robots can do all three at once very effectively, leaving no trace of biofilm whatsoever”.

What does this mean for patients?

So, how does this new research benefit the patients? First, patients won’t have to undergo the uncomfortable teeth cleaning procedure which involves mechanical plaque removal. Secondly, there will be minimal chances of damage to the oral tissues such as the and the gums during the cleaning procedures. The dentists can precisely control the cleaning action of the nanoparticle-based CARS. This is  great news for individuals who suffer from dental fear. Soon patients teeth can be cleaned by a team of robots which will be invisible to them. It’s just a matter of time when this technology becomes available for general clinical use and when it does, it will completely change the dental care industry.