Things to know about Bleeding Gums 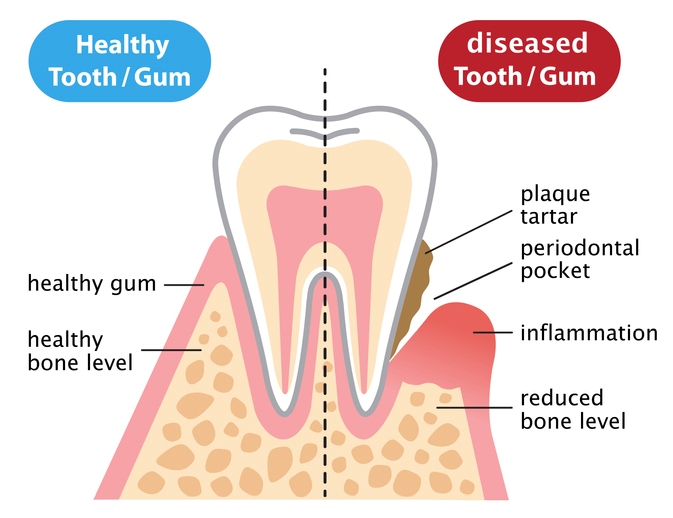 Bleeding gums can be a sign of several different diseases and deficiencies. If your gums bleed easily, it might be because of something simple, like using the wrong brushing technique or it could be a sign of a health condition you need to check out.

You may have bleeding gums if you

– Are suffering from gingivitis, a disease that causes inflammation of the gums
– If you brush too hard or your toothbrush bristles are not soft enough
– Ill-fitting dentures
– Certain medications, like blood thinners, antiseizure and immunosuppressant drugs
– Pregnancy gingivitis
– Nutritional deficiencies
– Blood disorders

Dental conditions that can cause gums to bleed

Lack of proper oral hygiene is the primary cause of bleeding gums. Gingivitis (inflammation of the gums) and periodontitis make your gums sensitive and prone to bleeding.

Bleeding gums are a sign of inflammation. It’s caused by plaque buildup at your gum line. Plaque deposits can harden into tartar (calculus), which will increase bleeding. The accumulation of plaque near your gums can cause gingivitis. If you have gingivitis, your gums will be irritated, red, and swollen that may bleed on brushing teeth. Taking good care of your teeth can resolve this problem. Brush your teeth twice a day, floss every day, use an antibacterial mouthwash and see your dentist regularly.

Gingivitis, if neglected can lead to periodontitis, a long-term gum condition that damages the tissue and bone supporting your teeth. Periodontal disease is an infection of the gums, jawbone, and supportive tissues that bind your teeth and gums. Gums become inflamed and infected with teeth getting mobile. If not treated periodontal disease results in you losing some of your teeth.

Deficiencies in Vitamin C and vitamin K can also cause gums to bleed easily. Vitamin C helps with tissue growth and repair. It heals wounds as well as strengthens your bones and teeth. Vitamin C deficiency can result in swollen and bleeding with time. Excessive bleeding might be because you are not getting enough vitamin K. Vitamin K helps your blood clot properly. It’s also good for your bones. Insufficiency of vit K in your diet or if your body doesn’t absorb it well can cause bleeding problems.

Ask your physician to check your Vitamin C and K levels if you have bleeding despite proper dental care. Follow a balanced diet containing essential nutrients you need to stay healthy. Hormonal changes that occur during pregnancy can cause the gums to become more sensitive, causing gingival issues.

Disorders like hemophilia, thrombocytopenia, and leukemia that affects blood clotting mechanism can also increase your risk of bleeding gums. Your gums might bleed more often if you take blood-thinning medications. Bleeding gums can also be a sign of leukemia. Leukemic patients suffer from a low platelet count affecting the ability to stop bleeding in different parts of your body, including your gums.

Have regular dental visits twice a year for professional cleaning. Your dentist will check for gingivitis and any other dental issues. Proper brushing and flossing can remove plaque from your gum line, reducing your risk of developing periodontal disease. Your dentist may prescribe you an antiseptic mouthwash to minimize plaque formation in your mouth. Warm salt water rinses can help soothe swollen and tender gums. Use a soft-bristled toothbrush. Medium and hard bristles are too abrasive for your delicate gums.

While gum pain is the most common symptom of dental health problems, other issues might be the cause. Schedule an appointment with your health care provider to determine the underlying issue causing your bleeding gums. A physical examination and blood work can help understand the cause of your bleeding and the treatment will vary according to your condition.